The backend solution Node.js is a runtime environment that enables JavaScript to be executed on the server.

Due to its remarkable performance, an increasing number of businesses such as Netflix, LinkedIn and PayPal are employing Node specialists.

Node is one of the most versatile back-end languages on the market. A company normally requires a NodeJS developer when they work with microservices architecture or lambdas.

Aside from the global market perspective, NodeJS has been the fastest-growing technology along with the competitors, granting a huge community worldwide. Meaning, it is easy to find a Node developer to scale up your activities or keep the maintenance of your services if they are no longer evolving.

There are pros and cons to any technology, but Node seems to weigh down more in the former category. We talked to full-stack developer Alexandre Brindizzi to understand the applicability of Node.js, what exactly Node developers do and are skilled in, and why he believes it is a wise investment to hire a Node developer.

"Fast-growing tech; versatile usage with multiple Node.js frameworks granting ease of usage for developers; a big and wide community worldwide turning it very easy to find NodeJS developers to interview and possibly hire; the fact that a developer who knows Node may also know other technologies based on the JavaScript programming language, such as React or Angular, are all factors granting you someone who will give you a full-scale architecture perspective and good practices along the development." 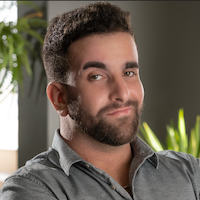 After this pitch, it comes as no surprise that a Node developer is very valuable to any team that operates with this technology. But, what does a Node.js developer’s work day look like? What do they do, exactly? Let’s explain it step by step.

Deploying and administering network applications written in JavaScript or its derivatives, such as IcedCoffeeScript and CoffeeScript, are the responsibility of a Node.js developer. They create backend components, manage data transmission between servers and users, and link apps to external web services. They assist front-end developers as well by incorporating web-based programs.

A skilled Node.js developer will be able to transmit data in a way that is reliable, quick, and safe.

Practically said, here are some of the responsibilities they have:

When asked if Node developers typically specialize in a particular niche, or if they can work in any field a software engineer might find themselves working in, Alexandre replies:

“It depends on the developer. NodeJS is nowadays used for backend services and microservices. The usage of modules in JavaScript makes it very versatile in a way you can also make it useful to lambdas for serverless methods. As previously said, a Node developer may not only be a Node developer but will probably be a multiskilled full stack developer with React or Angular, creating full-scale applications, using Node as something complementary.”

There goes a lot of thought, vetting and testing to find the right developer for a position. And since at Proxify we’re experts at this, here is what we do to achieve the best results.

To start with, a good Node developer should have a broad understanding of web application principles, know at least basic algorithm complexity and understand how to write efficient code.

A Node developer should also have Unix and Windows server knowledge, preferably at least on an intermediate level.

They should understand very well how a network of containers and pods works in a Kubernetes cluster or how to dispose of that service into a Unix server to make them disposable to the web.

When it comes to cloud solutions, a Node developer should be very aware and capable of creating backend services in AWS technologies, such as deploying it to the Kubernetes cluster, creating a lambda function, and disposing of it in the API gateway, etc.

Apart from the basic set of characteristics that depict any good employee (timeliness, self-organization, motivation, good teamwork and willingness to learn), and a good knowledge of English, here are some extra skills that would help a Node developer shine:

“Be a team player, among all qualities. They must see the entire scene with technical eyes, and understand how harmonic the backend they are going to work on must be, to make it not just easy for him now, but he should make it easy for anybody else about to join his team.”, says Alexandre.

He also adds that his ideal teammate should be communicative and shouldn’t make decisions alone if they’re going to impact more people.

Their architectural decisions, he adds, must follow what is more logical for long-term usage, regardless of how much effort it requires.

According to Full-Stack Data Engineer Andrey Kolosay, here are the questions that will be most effective in assessing a Node developer’s knowledge:

Expected answer: Even though JavaScript is single-threaded, the event loop makes it feasible for Node.js to execute non-blocking I/O operations by offloading tasks to the system kernel whenever possible. The majority of contemporary kernels support several background operations since they are multi-threaded.

Example answer: I am comfortable working with web frameworks such as Express.js, Socket.io, Nest.js, Total.js, Koa.js, and others.

Expected answer: Express is a well-known, non-prescriptive web framework created in JavaScript and hosted by Node.js runtime environment. It covers setting up your development environment, carrying out typical web development and deployment chores, and some of the framework's most important advantages.

Expected answer: The main reasons why you should use streams in Node are:

Expected answer: As an alternative to an array of integers for storing raw data, Node offers the Buffer class, which corresponds to a raw memory allocation outside the V8 heap. An application can access the buffer class without importing the buffer module because it is a global class.

Alexandre, on the other hand, says that no matter the level of knowledge and years of experience, a Node developer must have the answers to the following questions.

Expected answer: The technology uses a single thread to run the main loop of the application and scales up based on needs, allocating threads on what is called a thread pool for asynchronous requests.

Expected answer: Asynchronous requests are requests that take time to be executed, and as it requires time, it cannot block the main thread with the main loop, so an extra thread in the thread pool will serve to scale up the application.

Expected answer: It is where NodeJS coordinates what happens internally. The loop can never be broken, or the application will fail, so it can never stop. A request will be received, confirmed, executed and returned in that same order, always.

Expected answer: Because with a Mongo-Express-Node skill base, I would only require knowledge of front-end architecture to have full-stack knowledge.

According to Alexandre, a top Node.js developer must have the maturity and understanding of how to work with strongly typed and documented code, and must know that they need to guarantee the code functionality when required, rendering unit-testing another important skill.

“They need to understand a little of server-side, and to know that Node.js is usually the best tech to deploy in a container and create multiple instances, so that service can never create conflict with other external services”, he adds.

If you are aiming into microservices, he also states, that your developer of choice should also be very mature to understand the principles of microservices, making them always independent from each other. And for some cases, they must be very aware of manual scaling with certain libraries that you can control the threads you are scaling up.

Apart from that, he should be very good with the performance, at least aware of how to work with Big O notations, understand and be very capable of explaining and working with encapsulation and may know how to design the entire back end (and what it needs) just by understanding the business.

Node.js is a cross-platform JavaScript runtime environment that provides an infrastructure for running JavaScript code on the backend (server-side). It’s based on Google’s V8 engine that compiles JavaScript to machine code and ensures its super-fast execution. Node.js has an event-driven architecture and leverages asynchronous programming. Those features allow Node.js servers to process huge numbers of I/O requests coming from multiple clients at an unbeatable speed.

Have a question about hiring a Node.js developer?

Find your next Node.js Developer within days, not months

We can help you deliver your product faster with an experienced remote Node.js Developer. All from 32.90 €/hour. Only pay if you’re happy with your first week.